Instead of laying limits within which a dialogue can take place, the government, through the all-party delegation, should ask Kashmiri nationalists what they want and see how far it can go to accommodate them within the framework of the constitution. 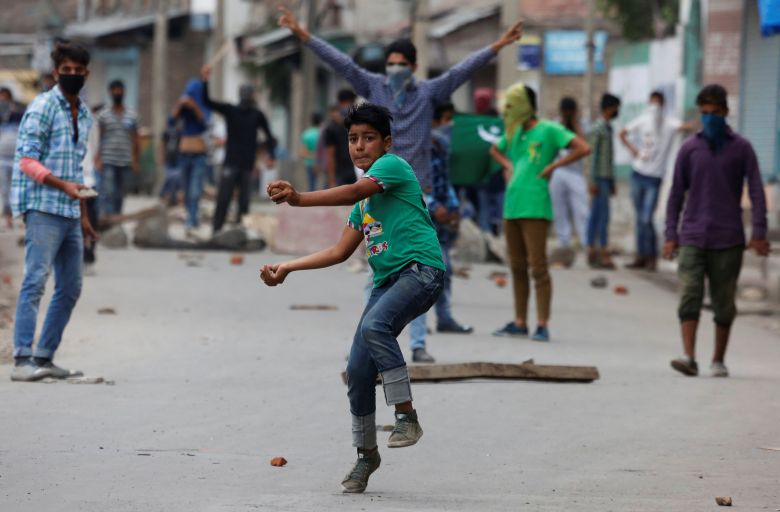 A protester throws stones towards the Indian police during a protest in Srinagar against the recent killings in Kashmir, August 9, 2016. Credit: Reuters

Last week Prime Minister Narendra Modi promised the Kashmir opposition parties that he would accept any solution suggested to him, provided it lay within the framework of the constitution. This promise was reiterated two days ago by BJP’s general secretary Ram Madhav, with the rider that Kashmiris had to propose and parliament had to decide, in aninterview with the Hindustan Times. Their sincerity will be tested when the all-party parliamentary delegation goes to Kashmir next week.

The last such delegation visited Kashmir six years ago. That visit had raised the hope among Kashmiris that Delhi was finally willing to heed their pleas and work out a settlement with the ‘separatists’ and Pakistan that would bring peace to the valley. The interlocutors’ report had raised their hopes further.

But nothing happened. Kashmir continued to reel under a ‘police raj’ presided over by the exceedingly unpopular Abdullah government and the interlocutors’ report did not even make its way into parliament. Kashmiris therefore realised that they had been duped. The purpose of sending an all-party delegation and then setting up the interlocutors’ team was to placate the Valley and buy time. The Centre’s goal had, throughout, been only to manage the unrest in Kashmir, not address its root causes.

We now know that this impression was not entirely correct: that home minister Chidambaram had made a powerful pleato take Jammu and Kashmir back to its pre-1953 position – of having ceded only defence, foreign affairs and communications to the Centre – and build a new compact with the elected representatives of the state over other issues of governance, but been turned down by his party. But Kashmiris did not know that then and probably don’t believe it now.

The Kashmir that the all-party parliamentary delegation will encounter next week will therefore be very different from the one it encountered in 2010. Six years ago trust in the central government and therefore hope of a substantive change for the better had not yet died. This time both are moribund and all they will meet is raw skepticism and suspicion.

On that occasion the stone pelting youth were a small minority of the young population of the state. Today they comprise most of the youth of the valley. In 2008 the ‘calendar’ of protest was firmly in the hands of Syed Ali Shah Gilani. This yearJoint Hurriyat committee’s calendars have become advisories: they suggest where the youth might go and what they might target. Decision-making is firmly in the latter’s  hands and the rash of protests against the lifting of the curfew on August 29 shows the youth are not willing to give it up.

The all-party delegation will therefore face an uphill task, but India cannot afford to have them fail for – as Mehbooba Mufti told an audience in Jammu two days ago – the consequence of failure will be the return of the gun to the Valley, this time in the hands of people too young and too crazed by anger to fear death.

What must the members of the delegation do to ensure that they do not fail this time?  The first absolute must is NOT to talk to the media before they go to Kashmir and not even afterwards till they have made up their minds on what to recommend. The reason is that every time they answer a leading question from a reporter or TV anchor, such as ‘will you talk to the separatists?’ or ‘are you prepared to go back to the pre-1953 arrangement?’ they will be putting down one more negotiating card, face upwards, on the table even before the negotiations have begun.

The second is NOT to shed crocodile tears over the sufferings of the Kashmiris. Today this only evokes rage; ‘if you felt so deeply for us why were you silent for six weeks as they were being gunned down and blinded by your security forces?’ is the answer they will immediately receive. Since they will have no answer, they will be better off not to raise the issue.

The third is NOT to claim that only 5% of the valley is involved in the militancy and that it is entirely Pakistan’s doing. 5% may well be the proportion involved in the stone pelting and the demonstrations that followed Burhan Wani’s death. But the French and American revolutions were engineered by as small, or even smaller, proportions of the affected population. The former remained urban till its very end and the fissures in American society over separation from Britain that remained were demonstrated when large numbers of settlers move to Canada after the American war of independence.

Today, there is a disturbing  similarity between the way Kashmir is being driven towards secession and the way the American colonies were forced to it by mad King George III between 1765 and 1783. Each time the settlers tried for a compromise agreement that would allow them to take decisions on their own, the crown would respond with an extra dose of repression, till they were left with no choice but to take up arms and seek external support.

A similar insensitivity is disempowering older more moderate Kashmiris progressively and transferring power to the most volatile and short-sighted segment of the population – its youth between 12 and 18. Today they enjoy the support of almost all segments of the population, but the support is conditional upon their delivering Delhi to the negotiating table in a meaningful way.

For the angry youth ‘meaningful’ means a complete breakaway from India, but even among them there is only limited support for merging with Pakistan. As a result  ‘azadi’ (freedom)  continues to have as many shades of meaning as it did in 1990. The common denominator in all of them is empowerment.

Kashmiris have been feeling disempowered ever since Sheikh Abdullah was arrested in 1953, but the feeling has worsened progressively, first with the rigging of  elections in the valley to prevent the National Conference from losing its majority in the Jammu and Kashmir state assembly, then with  the imposition of military rule in 1990 and finally with the closing of all doors to political dialogue after the elections of 2008 with the specious claim that the high turnout showed that militancy had come to an end.

It is this feeling of disempowerment that the all-party delegation must address head-on. Today the Armed Forces (Special Powers) Act (AFSPA), the Jammu and Kashmir Public Safety Act,1978 , the ubiquitous bunkers and police barriers and the endless checking on the roads are the external symbols of this disempowerment. Its real elements are the unlimited powers of interrogation, punishment and extortion enjoyed by the police and para-military forces; their absolute unaccountability and therefore the feeling of helplessness and despair of those who have got onto their ‘history sheets’.

It is this that the all-party delegation must address and the simplest and most effective way of doing this is simply to ask all those with whom they meet what they would want India to do. For in that question lies the kernel of empowerment.

Instead of laying out the limits within which dialogue can take place even before it has started, as every Indian government has done so far, let it be India that asks the Kashmiri nationalists what they want and then see how far it can go to accommodate them within the framework of the Indian Constitution.

Had Delhi been doing this from the start it would have found out long ago that, left to decide by themselves, very few Kashmiris would want to sever their links with India. What they will, almost certainly, ask for once tempers subside, is a continuation of the right to trade with, travel to and from, manufacture and be educated in India. What they are likely to want continued is the access to the Supreme Court of India, the supervision of elections by the election commission and the devolution of finances from the central government by the finance commission. What they are unlikely to ask for is control over defence , foreign affairs and communications – for these will strain their already limited financial capabilities beyond endurance.

However, what they will ask Delhi to do is work towards the normalisation of relations with Pakistan, for they need this to ensure the lasting peace without which they will never be able to plan and control their lives.  If India concedes this and Pakistan responds, the Kashmiris will become the catalysts for peace in the sub-continent.