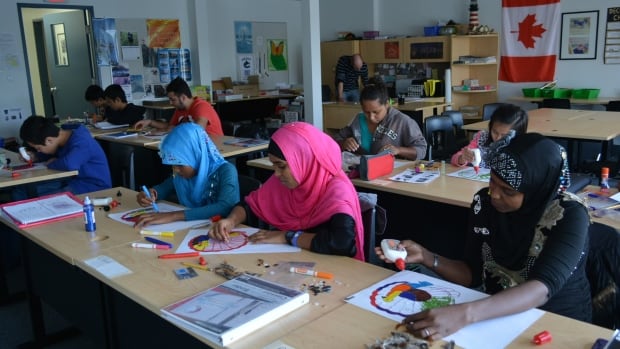 Refugee students at an art class at the Surrey Schools ELL Welcome Centre. The National Council of Canadian Muslims has released a guide for educators to fight Islamophobia after thousands of refugees came to Canada this year. (Surrey ELL Welcome Centre)

The National Council of Canadian Muslims has released a guide for teachers and school counsellors to help them discuss issues around Islamophobia in class.

The guide comes after thousands of refugees from Syria arrived earlier this year — many of them students.

Amira Elghawaby of the National Council of Canadian Muslims says the refugee crisis was one catalyst for the guide’s creation. But she says ongoing conflict in the Middle East, last year’s federal election and theIslamophobic rhetoric of Donald Trump were also factors.

“All of this sort of came together and we realized educators are looking for some support on how they’re going to deal with all these varied issues that are interconnected as they go into this new school year,” she told On The Coast host Stephen Quinn.

Elghawaby says the guide was sparked by situations in classrooms as well, including what she says was a Grade 5 teacher raising the spectre of terrorists coming with refugees and racist social media posts from at least one teacher.

“It’s peer-to-peer on playgrounds. We know sometimes young Muslim children … are being made fun of. Sometimes they’re not comfortable saying they’re Muslim at all,” she said.

To hear the full story, click the audio below