Muslims condemn the attack on the Gurdwara in Afghanistan

March 25, 2020, Washington, DC — The Center for Pluralism and Muslims Together condemn the attack on the place of worship of the Sikh Community in Afghanistan.

At a time when the Sikh Community has become a shining example to the world by serving all people affected by the Corona Virus, it is sad that their place of worship was attacked. 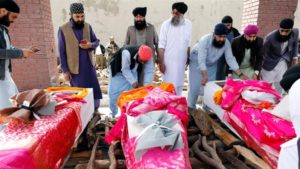 The attack on the Sikhs is an act of cowardice, ISIS gang of murderers cannot fight with us the Americans, so, they attack the vulnerable ones who have done nothing but good to the communities where they live.

We urge the Department of State and Defense to give them thirty days to surrender and become good citizens or face the drones.

We urge the people of Afghanistan to conquer the hearts of the Sikhs and other minorities by providing them security and removing all the threats against them.

We also urge our fellow family members of faith communities, particularly Sikhs, not to hold it against Muslims. The entire Muslim world has condemned this ugly act. These are the acts of people who do not get their religion right. Islam strictly prohibits killing any human unless it is in self-defense.

The Sikhs have been in the forefront when a calamity strikes a society. God bless the Sikh community. Now, they feel insecure about living in Afghanistan. Indeed, all of us from Atheists to Zoroastrians, including Christians, Muslims, Hindus, and Dalits, empathize with the Sikhs of Afghanistan. We all feel insecure wherever we are a minority. The hallmark of civilization is when a majority of the people treat everyone as equals with equal rights and equal opportunities to seek life, liberty, and happiness.

We are pleased to highlight a few of the many charitable acts of Sikhs within the last three months, there are many more acts, but this is what we have available now.

In New York and Washington DC, the Sikhs are distributing over 30,000 meal packets to the victims of Corona in New York, and several more thousand in Washington, DC.

In New Delhi, one Sikh gentleman sold his Apartment complex to feed and provide warm coverings to the protestors at Shaheen Bagh.

When an Ugly minister of Haryana announced, “now that we have Kashmir, Hindus can get the fair-skinned Kashmiri women and produce light-skinned children.” The Sikh Community challenged it and held a press conference and said, we will protect the Kashmiri women; no one is going to dare touch them.

They are carrying the disinfectants on their backs, and spraying every vehicle that passes them on the roadside, they are risking their own life, but are bent on saving others.

Now that there is a complete lockdown in India, the right thing to do, but not a well-planned action, the folks who live with day to day earnings are hurt. No work, no money, and no food. The Sikhs are out there again, delivering a bag of rice and lentil to the folks living in huts.

In the past, the Muslims had condemned identifying Sikhs and Hindus in Afghanistan to harass them during the Taliban take over in the early ’90s.

The Sikh community was awarded for the exemplary model they set in dealing with the tragedy of Wisconsin – instead of anger, they showed the way of mercy and prayers. Several Mayors honored five Gurdwaras in Dallas, Texas, in the 12th Annual Unity Day USA event.

The Center for Pluralism recognized the Sikh community in a large gathering of six mayors and who is who of Dallas, Texas, in the Unity Day event. The Sikh community set an example in dealing with the tragedy in Wisconsin by prayers and not revenge or anger.

We had condemned identifying Sikhs in Afghanistan to harass them during the Taliban take over in the early ’90s.

We also had a full program reflecting the Sikh Genocide of 1984 in India. The message is at  http://holocaustandgenocides.blogspot.com/2013/01/6th-annual-holocaust-and-genocides-sikh_23.html here are the pictures  https://www.flickr.com/photos/mikeghouse/sets/72157636856041595/

The Sikhs worked on the opening of the Kartarpur Corridor between India and Pakistan, a good first step towards build peace between the two nations.

We request the Afghan Government and the United States governments to find the attackers and punish them according to the laws of the nation. We further ask that all places of worship are protected, and the Pluralism values of respecting the otherness of the other be taught.

Much before all this happened, we had announced recognizing the Sikh community once again for their service to the humankind in the upcoming 20th Annual Thanksgiving Celebrations and Awards Night on November 20, 2020, the outlines of the program are at http://thanksgivingcelebrations.blogspot.com/