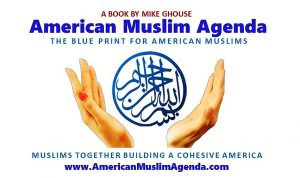 Everything begins with a dream and a vision. Nothing ever has been accomplished without a roadmap. As American Muslims, we have not developed any concrete plans to extricate ourselves out of the chaotic situations, hostility and incessant Islamophobic rhetoric we face. Each time a terrorist acts out, we start praying and wishing that the terrorist not be a Muslim, and start blaming the media for misrepresenting Muslims.

We are American Muslims, and we can do better than that. Let’s set a bold goal for a Muslim woman to be the President of the United States in the year 2036.

Why a Muslim woman? One of the many ways to pull ourselves up by our bootstraps is to look at our history and revive the model created by Bibi Khadija; she made things happen! She believed in Muhammad when he came home trembling from the experience of encountering Jibril, the archangel. She comforted him and accepted him, and encouraged him, that got the ball started rolling. If we want a significant change in our society and around the Muslim world, this is the way to go forward.

Between now and the year 2036, we have 18 years to work our way up. Each one of us can consciously work towards that goal. We have babies, toddlers, young persons, youths, adults and seniors whom all can play a role in achieving this. No one has to go out of the way to accomplish this, but live a normal life and be conscious of small things we can do to become one with all. The book outlines what each one of us can do to get there.

This book paves the way to own the mistakes we have made, remedy them, and become fully integrated Americans. There is only one America, and all of us are fully integrated parts of that nation.  We need to learn to engage with those who are opposed to us, and I have some success stories to share on that front.

Everything begins with strategic planning, and Mike has spent a considerable amount of time envisioning “A Muslim President” and has put in an effective plan together to achieve it.

We have to be a part of the American story and become one with all to build a secure future for every American. All humans, men, and women are created equal, and no one is more privileged than the other.

Two of the sixteen chapters focus on Islamic Values and American Muslim Agenda. Islamic values that contribute to building a cohesive America where each one of us can live in peace with the other. Whereas, the American Muslim Agenda recommends items for Muslims to consider in becoming full-fledged contributing Americans to America’s success story.

Ultimately each one of the 322 Million of us must feel secure with our faith, race, ethnicity, gender, sexual orientation, and other uniqueness in the pursuit of life, liberty, and happiness.

When we start defending America and American values, we are in! We become an integral part of the American Story.

Robert Crane, the first Muslim US Ambassador, writes about the book;

“Mike Ghouse’s path-breaking book, American Muslim Agenda, recommends a new agenda in the form of a paradigm shift from the negativism of attacking Islamophobia to the effective support of America’s founding vision as a model of every world religion’s essence in compassionate justice. This is based on the interfaith search for transcendent truth from both scriptures and natural law to translate this wisdom into principles of both ethical value and jurisprudence.  These principles, in turn, are essential to guide the new think-tanks that shape policy agendas, as well as to inform the voters and legislators who have the practical responsibility to translate the vision of compassionate justice into both societal and institutional reform.  This is what it has always meant to be an American.”

As moderate Muslims, we can turn around the narrative about Muslims. Here are three minutes from Brigitte Gabriel on Sean Hannity show at Fox News. Please note that Sean Hannity did not bring ISNA as the co-conspirator, because, Dr. Sayyid Syeed gave me a copy of the judgment releasing ISNA from such pronouncement and I delivered the message to Hannity at Fox News resulting in no more attacks from Fox News on ISNA. Video:  https://www.facebook.com/MikeGhouse/videos/1438210749532124/

Here is another video about the results we can produce through Positive Engagement with fellow Americans who are opposed to us because they don’t know us.  No more attacks on the Quran since then. https://www.youtube.com/watch?v=gd-mgSFziII

Mike will be available for discussions after November 10th. Meanwhile, a few updated talking points of the book are at https://americanmuslimagenda.com/

Mike Ghouse is a public speaker and the founder and President of the Center for Pluralism in Washington, DC. He also established the think tank, World Muslim Congress in 2001 and is revived now.  He is committed to building cohesive societies and offers pluralistic solutions on issues of the day. More about him at https://www.linkedin.com/in/mikeghouse/