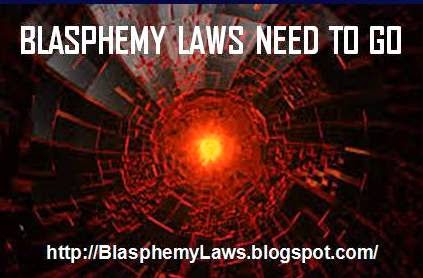 There should be no punishment for Blasphemy, it is not in Quran and it was not practiced by the prophet. God (Quran) says the dearest human to him is one who forgives, and Prophet practiced it by praying for those who cursed him. He could have smashed those miscreants in Taif, but he chose to pray. As followers, we are suppose to pray and not punish.


Blasphemy Laws are not God’s laws, they are the tools of oppression by the tyrants to force obedience from others, it goes against the principle of Quran – there is no compulsion.

Insecure men do not have the confidence in themselves to dialogue and resolve the conflicts, nor do they have faith in God and his word.

When people disagree with them, they will beat them up or eliminate them with power, screams, deaths and threats.

Secure men believe in God and the Day of Judgment, and he is the only one who knows what is in our heart. He says in Quran, I am closer to you than your jugular vein. Meaning, he knows our thoughts, intentions and actions on time, as we do.

Secure men discuss things, square the difference through a dialogue. Indeed, that is the reason God gave us a tongue to dialogue instead of what the animals are programmed to do.

Insecure men are like animals who lock in their horns, tear each other up by their fangs or bloody the other with their paws, as they are designed to handle the conflict that way. God did not given them  the brains to discuss and instead gave horns, fangs and paws.

Who are we to punish then? It is un-islamic and cooked up by the tyrants . Unless a few of us start speaking against Blasphemy, the evil vigilantist anti-Islamic practice of insecure men will continue. There is no punishment for Blasphemy.

Except the first four caliphs, who were chosen to govern,  we have a bad history of oppression.  Have we ever been ruled by sane men? It is not just us, until 100 years ago with the exception of the United States; the whole world was run by dictators and kings particularly in Muslim majority nations. Most nations are moving towards civil societies run by the consensus of the people and sadly Muslim societies have not been able to free themselves from the shackles put in by the dictator Caliphs and Kings.  At least one thing is right about secondary Muslim literature – they called the first four Caliphs Rashidun – the rightly guided ones. Since then we have good, bad, and ugly Muslim rulers. .
Look at our history, we have been prevented from independent inquiry, we are run over by the damned dictators and kings. Thank God we have Turkey, Bangladesh, Malaysia and Indonesia, and Pakistan (occasionally), where the civil society rules. Islam will do well in democracies and freedom.
Unfortunately Muslims do not have the breathing room to be themselves, they are continuously bonded by one tyrant or the other… We certainly can pray asking God to help Muslims to be free to govern themselves and not throw them in the mouths of Mullahs from the dictators. One bad Mubarak goes and the brotherhood is out there to force their laws on the unwilling people, and now we have another tyrant Sisi, where will it end?
We the Muslims have been reduced to Pavlovian Muslims – we are too damned conditioned with the laws created by men like dictator Zia ul Haq, intolerant Ibn-e-Wahhab, sneaky Maududi and Banna. We need to be free, and follow the guidance from God.
Prophet Muhammad said, I am leaving this book to you – he did not say, well, I have assigned the interpretation of the book to the Imams, Kings and the dictators… you don’t need to read the Quran any more, just follow the rules made by the dominant partners of God, you will get a free pass on the Day of Judgement. They will take care of you.
Time to start from Zero and follow the Prophet. Pull down the “Great Work” of big time Imams and not equate their work with Quran, they have made us cowards and insecure with Blasphemy and Apostasy laws that go against God’s will.
Here are a verses from Quran, compiled by Irtaza Muhammad.
[5:57] O you who believe, do not befriend those among the recipients of previous scripture who mock and ridicule your religion, nor shall you befriend the disbelievers. You shall reverence GOD, if you are really believers.
[6:68] If you see those who mock our revelations, you shall avoid them until they delve into another subject. If the devil causes you to forget, then, as soon as you remember, do not sit with such evil people.
[18:106] Their just requital is Hell, in return for their disbelief, and for mocking My revelations and My messengers.

My note: Hell and punishment is God’s business and not ours. Ours is to forgive and pray for the good will.
[39:48] The sinful works they had earned will be shown to them, and the very things they used to mock will come back to haunt them.
[45:33] The evils of their works will become evident to them, and the very things they mocked will come back and haunt them.
Why the Muslim masses ignore the Messenger Muhammad?  Who they want to please?
The punishment is delivered by God, not by you or me.
The killing is justified only if  people wage  war against you. You may kill them, in that case:
[5:33] (Asad) It is but a just recompense for those who make war on God and His apostle, [43] and endeavour to spread corruption on earth, that they are being slain in great’ numbers, or crucified in great numbers, or have, in l’ result of their perverseness, their hands and feet cut off in great numbers, [44] or are being [entirely] banished from [the face of] the earth: such is their ignominy in this world . [45] But in the life to come [yet more] awesome suffering awaits them


43- The term “apostle” is evidently generic in this context. By “making war on God and His apostle” is meant a hostile opposition to, and wilful disregard of, the ethical precepts ordained by God and explained by all His apostles, combined with the conscious endeavour to destroy or undermine other people’s belief in God as well

44- In classical Arabic idiom, the “cutting off of one’s hands and feet” is often synonymous with “destroying one’s power”, and it is possibly in this sense that the expression has been used here. Alternatively, it might denote “being mutilated”, both physically and metaphorically -similar to the (metonymical) use of the expression “being crucified” in the sense of “being tortured”. The phrase min khilaf-usually rendered as “from opposite sides”-is derived from the verb khalafahu, “he disagreed with him”, or “opposed him”, or “acted contrarily to him”: consequently, the primary meaning of min khilaf is “in result of contrariness” or “of perverseness”

The killing is not justified if people evict you. You may only evict them:
[2:191] You may kill those who wage war against you, and you may evict them whence they evicted you. Oppression is worse than murder. Do not fight them at the Sacred Masjid, unless they attack you therein. If they attack you, you may kill them. This is the just retribution for those disbelievers.
The killing is not justified if people insult the Prophet. God will take care of it.
[18:106] Their just requital is Hell, in return for their disbelief, and for mocking My revelations and My messengers
And, these are some of the Quranic wisdoms:
[42:37] They avoid gross sins and vice, and when angered they forgive
[42:40] Although the just requital for an injustice is an equivalent retribution, those who pardon and maintain righteousness are rewarded by GOD. He does not love the unjust.
The Muslim masses need to learn a lot from the Quran.  They are shackled by their Ulams and Allamas!
# # #
Mike Ghouse is a Muslim thinker, speaker and writer. Information about him is available in 63 links at www.MikeGhouse.net and his current writings are at www.TheGhousediary.com.