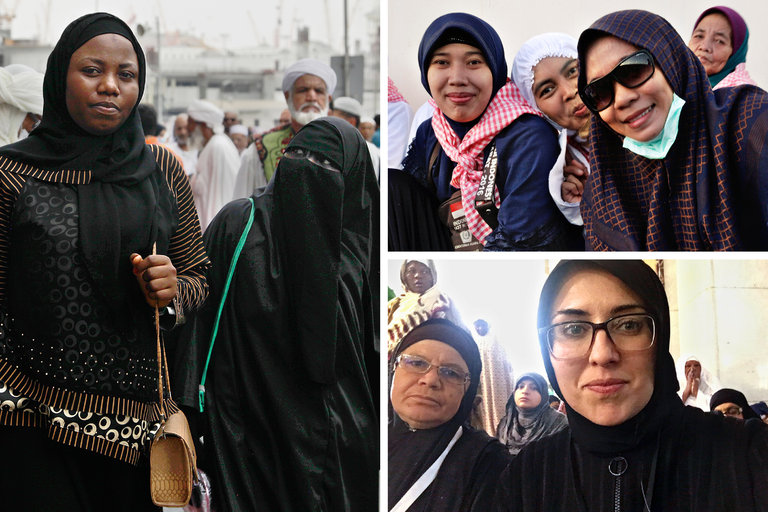 Women at the hajj, clockwise from left: on Ajyad Street, one of the main thoroughfares leading to the Grand Mosque in Mecca; Indonesian women rested on a sidewalk in the tent city of Mina, where nearly 2 million pilgrims slept for three days as part of their hajj rites; and the Times correspondent Diaa Hadid during the hajj. Credit Diaa Hadid/The New York Times

MECCA, Saudi Arabia — “Sister, where are your socks?” one of the women I was sitting with demanded. “Don’t you know you have to cover your feet?”

We were in the sprawling Grand Mosque that surrounds the Kaaba, Islam’s holiest site, during the hajj, the five-day pilgrimage of rites and rituals that ended on Wednesday. I could not decipher which of the four Saudi women in identical billowing black robes and black gloves was speaking to me because their faces were covered with not one but two veils, something I had never seen before.

They made space for me. I discreetly covered my offending feet with my own long, black robe, which I bought specially for the hajj, my first. These women who looked like black ravens poured me golden Arabian coffee from their thermos and fed me crunchy yellow dates while we waited for Friday Prayer to begin.

There it was again. I was at once frustrated by Islam’s nitpicky strictures on women’s dress and embraced by its warm sisterhood. Over and over again during this physical and personal journey, I was confronted by my conflicting feelings on how the faith I was raised in deals with gender, the very thing that had made me take off my hijab in college.

At its founding, 1,400 years ago, Islam was revolutionary for its time in seeing women as spiritual equals. But in its contemporary conception, the day-to-day gender roles trouble me.

My testimony in some Islamic court matters would count for half that of a male witness. Men can take four wives, women one husband each.

Yet Muslim women have a right to an education, to be scholars and in some cases jurists. We have as an eternal role model the Prophet Muhammad’s first, beloved wife, Khadija, a successful trader who popped the question to a man 15 years her junior.

“Treat your women well and be kind to them,” Muhammad himself urged in his last sermon, during his final pilgrimage to Mecca. “It is true that you have certain rights with regard to your women, but they also have rights over you.”

So, kindness and rights, but also women as something less than men. It can feel patronizing, and diminishing of our full humanity. It is why I started to lose faith after a childhood in an observant family and what I still struggle with, at 38, living a life that is secular but guided by Islamic values.

Each day in Mecca provided powerful reminders of a religion that seems to simultaneously embrace women and push them away.

Another day at the Grand Mosque, I met Saraya, a middle-aged woman who is from South Africa but lives in Australia, where I grew up. She had longed to make the hajj for years but was unable because she lacked a mahram, or male guardian — usually a husband, brother or father — to accompany her; male pilgrims can come alone.

She got here only because the Saudi government allows some women over 45 to come with an older female companion. (I got around the mahram requirement because I came on a journalist visa, which included a different kind of guardian, a Saudi minder named Abdul-Rahman who accompanied me during all my reporting.)

Saraya, whose last name and age I never had a chance to ask, said there had been “a few incidents” that detracted from the positive experience of her pilgrimage, like when someone in her delegation was “propositioned in a taxi,” and the fact that men frequently pushed in front of her.

“But I’m a bit bohemian, so I trust the energies around me,” she added. “I just let it flow; whatever is supposed to come is a learning.”

Once women overcome the obstacles to getting here, they are required to perform all the same rituals as men. The only real gender difference on the hajj is that men are supposed to wear two white sheets with nothing underneath (women have no specific dress requirement beyond modesty), and at the end, men shave their heads and women simply cut a lock of hair.

Unlike in the segregated prayer spaces of mosques and the separate wedding celebrations of conservative Muslims, men and women mix freely during hajj rites: walking together seven times around the Kaaba; climbing together to the top of Mount Arafat, where supplications to God are believed to be answered; throwing stones together at the Jamarat, the three pillars that symbolize the devil. There was something lovely about watching that, doing that.

But segregation— and unequal treatment — come back five times daily with the call to prayer.

One night at the compound where my 500-person V.I.P. delegation was staying in Arafat, I was working when the men suddenly started kneeling in a large, air-conditioned, carpeted room. I asked where the women should pray, and various officials kept directing me back through a parking lot crammed with buses until I realized there was no space set aside; we were meant to bow alone in our rooms.

Another night, as I tried to find room between worshipers, a security guard shouted that I was taking space where men needed to walk.

Among other special rules around the hajj, there is a relaxation of some of Islam’s modesty strictures: Women are not supposed to cover their faces. But I met several female pilgrims who still shrouded themselves, either with thin gauze or with a cloth draped from a visor. One step forward, two back.

Beneath the veils, though, were hardly oppressed chattel. One woman I met, Mervat, works as a cardiologist in war-torn Yemen, risking her life to save lives. 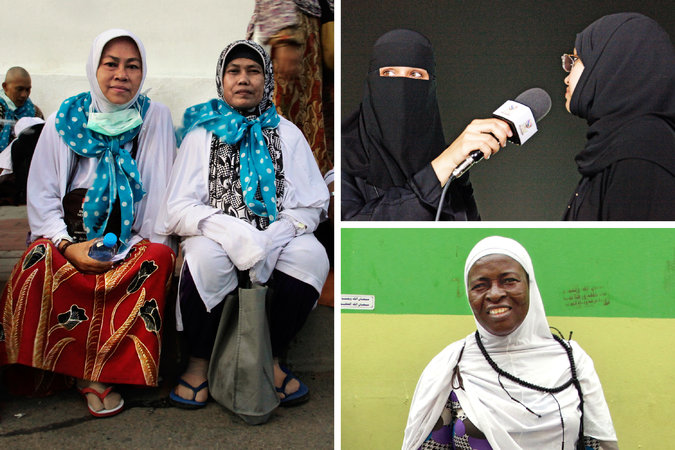 During her visit to Mecca for the hajj, Ms. Hadid met many Muslim women and said she saw powerful reminders of a religion that seems to simultaneously embrace women and push them away.CreditDiaa Hadid/The New York Times

Then there was Raghdah Hakeem, 27, a Saudi assigned by the Ministry of Culture and Information to care for the women in our delegation, which included 100 journalists (about 10 of them women, which the veterans said was the most they had ever seen covering the hajj).

When Ms. Hakeem was ordered to sit at the back of the bus one night, she refused and stayed in her seat, a Muslim Rosa Parks. “I can sit wherever I want,” she recalled telling the elderly, bearded official. She grinned as she shared the rest: “All the men around me said, ‘I’m so glad you didn’t go.’ I stood for my opinion, and they supported me.”

Despite dire warnings from my mother and sister, who had done the hajj before me, I did not experience sexual harassment in any form — no groping, no gestures, no untoward or unwelcome comments. I felt safe. But also, too often, second-class.

When our delegation reached the rocky plain of Muzdalifa, we were ushered into a women-only compound akin to mobile homes. It was starkly different from the accommodations of the rest of the pilgrims, who traditionally sleep under the stars on pieces of cardboard and sheets, men and women in separate but close quarters.

In Muzdalifa, pilgrims are meant to gather stones to throw at the three Jamarat pillars. Instead, somebody left rocks near the entrance of our compound so we wouldn’t have to go out onto the plain.

It was a thoughtful gesture for some of the women in our group, who rushed to cover themselves whenever a man approached our quarters, usually to deliver food or drinks. Once, one of my roommates, wearing a rainbow-colored robe with strawberries, only had time to hold a veil up in front of her face. She looked as if she were deleting herself from a picture.

But for me and a few other female Muslim journalists, the gesture felt like a slight. We wanted to gather our own stones, to experience the whole hajj.

We strolled onto the plain, and I bent to pick up rocks and put them into an empty water bottle. As I rose, one of those veiled women handed me a yogurt drink to rehydrate.