About 40 different religious traditions had 2 minutes each to demonstrate their spiritual prayers at the end of the three days conference. Memnosyne Foundation organized the event. 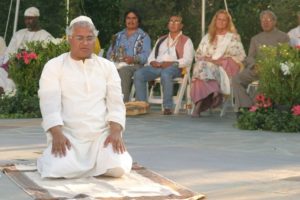 Given the time limit, as a Muslim, I chose to pray 1 unit of prayer, I was opposed by Muslims when I mentioned about it, even my late wife opposed it. That there is no such thing as One Rakat (Unit) of prayer. I sought forgiveness from God, as the prayers were needed for fellow humans to understand Muslim prayers. Yes, I prayed one Rakat, the tradition is two minimum.

By the way, that was one of my most devotional prayers, I felt God’s presence, and I felt the burden to do the right thing and to communicate with my fellow members of the family of faiths how Muslims pray.

Years later, at the Parliament of Worlds Religions, a Muslim woman scholar from Saudi Arabia gave a talk about prayers – then she asked a volunteer to pray one unit of prayer. Ah, what a coincidence! I volunteered and prayed. People loved it and understood how Muslims pray – I did the prayers in the English language.