Tarek Fatah is the new provocateur in India with his TV show “Fatah ka Fatwa” on Zee News. While most Muslims go about living their lives, a few could not stand his slant on their practices and attacked 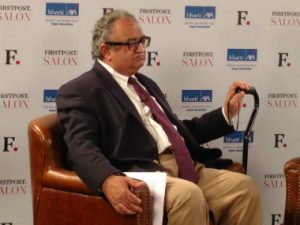 him at the Jashn-e- Rekhta, the festival of Urdu language in New Delhi.

There are two sides to the conflict and the solutions are many.

Fatah is as intolerant as the people who mistreated him.  He cannot handle criticism and that is his greatest weakness. He is known to cut you off from his facebook page, yahoogroups or other social media if you differ with him.

The guy is trapped in the net cast by the right leaning groups and is too eager to appease them, and of course delivers the words they want to hear. He validates the stereotyping of Muslims for them. All the while, he relishes the thrills in vexing those few Muslims.

The groups’ hypocrisy is incredible.  They want to throw out the Pakistani players and singers but they love the Pakistani bashers. As Mahmood in the film Padosan says, “Ek pay rehnaji”. Tarek Fatah is their man who bashes Pakistan and also Muslims. They got two in one devil. What has happened to the integrity?

However, the Muslim behavior towards him was not Muslim in any fashion. I am sure each one of the guys that misbehaved towards Tarek can easily recite how Prophet Muhammad (pbuh) treated people who differed with him.  He was kind even towards the lady who threw trash on him, he prayed for the miscreants in Taif who pelted rocks at him and there are plenty of examples that they quote so gleefully, but don’t believe in it enough to practice it.

I urge Muslims to be Muslims and see how you earn respect from fellow humans. Be the Amins of the society and be the conflict mitigaters and goodwill nurturers.

If you entertain the ugly thought of harming Tarek Fatah, I will tell you God will protect him, not because he deserves it, but because you are unjust and mean towards him. On the Day of Judgment Prophet will go against you if you are unjust towards fellow humans.

We don’t like anyone from the majority to silence us, but we are doing the same to others who differ from us. We need to clean up ourselves from the duplicity.  Our inside and out should be the same.

It is embarrassing that some of us do not have faith in God, Prophet or the Quran, yet they claim to be faithful.  They think God is a weakling and will disappear if someone criticizes him and believe that Prophet Muhammad needs their protection; can you believe that mind set? It should be the other way around God protects us all, and Prophet’s mercy is upon all of us, not just Muslims.

Harassment of Tarek Fatah is not acceptable; this is a dangerous trend of silencing people. People like Taslima Nasreen, and Tarek Fatah have come and gone, but the bad behavior of those few Muslims make all of us look bad.

God, Quran and the Prophet are not going to disappear because someone criticizes them, they are here forever. Instead of fighting with them, we need to fight with ourselves in finding the answers to their criticism.  Over the years, I have accepted ugly challenges from men and women who attacked these; I’ve studied many versions of translations and have taken up challenges from the rough rods.

Please visit www.QuraanConference.com to read the whole story.  That’s how strong my faith is and I thank Allah and the Prophet for the guidance. I hope you’ll earn your faith through accepting challenges gracefully and responding reasonably.

The right thing to do is challenge Tarek Fatah to a debate, be prepared to lose, he is very knowledgeable. Getting angry at him or simply quoting Hadith won’t cut it; he will make you look like a fool when he points out that it is not a legitimate quote.  Study the wisdom of the Hadiths but please beware of the fake Hadiths that go against God’s qualities of Rahman and Rahim and justice. Prophet Muhammad (pbuh) is a mercy to mankind, and if a Hadith shows him to be unkind and a misogynist, it is a fake Hadith.

Tarek will lose if you use the wisdom to challenge him, you will lose if you use the circular logic that Quran says so or Hadith says so, full stop!  Full stop discussions have no place in Islam. What you read is not the whole truth, even the translation of Quran are flawed (read four translations to know the truth). We have to learn, see the signs of God and continue to learn.

Men like Fatah are needed in the world to challenge Muslims who cannot think. Islam is covered up with layers of myths that are not Islamic, and we have the responsibility to clean it up. Thanks to him for stirring it up the dust.

Only Allah decides who is wrong or right as far as Imaan is concerned, and not you or me. Only Allah should be feared, if these guys act like Allah to frighten others, they are committing shirk.
Do us Muslims a favor, if you want to harass others, be a bully, do it in your own name, and not in the name of Islam; none of us are authorizing you to do bad things in the name of Islam. You are on your own today as well as on the Day of Judgment.  Your acts are your own, and have nothing to do with Islam. I don’t care what you do, but don’t do anything to malign Islam and don’t be arrogant to believe that God and the Prophet need your protection, they don’t need you, you need them to help you become kind, just and respectful of God’s creation; life and environment.

Dr. Mike Ghouse is committed to building a cohesive America where no American has to live in tension, apprehension or fear of the other. He is a pluralist, thinker, writer, activist, motivational speaker and a news maker. He offers pluralistic solutions on issues of the day. More about him in 65 links at www.MikeGhouse.net