Page 113 of the book “Hadith” caught my attention – the same Hadith was quoted by the Criminal Al-Baghdadi, he sourced it from Ibn Hisham’s Seerah. The whole world was angry at that idiot Baghdadi, can you blame him really? He was quoting the ridiculous Seerah – Shame on us for not labeling the Seerah by Ibn Hisham and Ibn Ishaq as a bogus book. 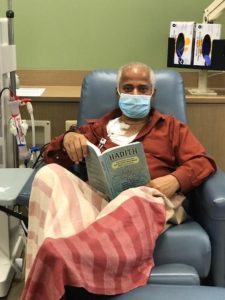 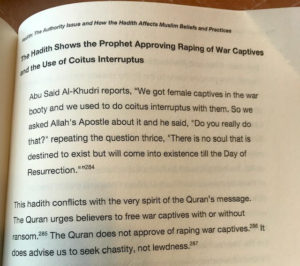 When our fellow members of the Aalameen – the Christians, Hindus, Jews, Sikhs, and others read this Hadith, they draw the conclusion that Islam is a violent religion. It will take a lot of work on our part to get rid of this non-sense.

Read this book, Hadith,  you will discover how much non-sense is passed out as Sahih Hadith. It is our duty as Muslims to make sure, that Muslims and fellow humans see the truth.

Prophet was a man of peace, his gentler and kinder treatment of even his enemies was merciful. A lady threw trash on him daily, one day when she did not do that, he went in to find out if she was ok – The urchins threw rocks at him, he was bleeding, his associates wanted to beat up those guys, instead, the prophet prayed for their wellbeing, virtually following Jesus – forgive them, Lord, for they know not.

He was one of the first men in history who restored women’s rights, the human rights that men have had, to be the individual to make decisions out of her free will, own property, business, initiate marriage and divorce. A thing that was not available to even American women until a hundred years ago. Women were considered a man’s property throughout the world 100 years ago, whereas the prophet had said men and women are equal in the eyes of God, and they are individually responsible for their actions in the presence of God.

Given that, Al-Baghadid believed that he can rape the Yazidi, Christian and Shia captive women and that belief came from the bogus Seerah (biography of the Prophet).

A lot of damage to the reputation of Islam was done by many Hadiths. Of course, it is our duty to inform Muslims and Non-Muslims alike that the problem is not with Islam – but with in-authentic rogue books.

If you stick with the Quran – you cannot go wrong. Make sure, you read at least four different translations to weed out the two bad translations.

Kudos to Dr. Abdur Rabb and Dr. Siraj Islam for picking on the Hadiths, it is time we place this book in the hands of our clerics – who innocently believe in the wrong things about Islam. Isalm is about creating peaceful societies. All that non-sense about Darul-Harb and Darul Islam is the fabrication of xenophobic men.

Please do read the book American Muslim Agenda as an accompaniment to the book Hadith- the e-book is $5.99 on Kindle/Amazon – visit www.AmerricanMuslimAgenda.com for more about the book.