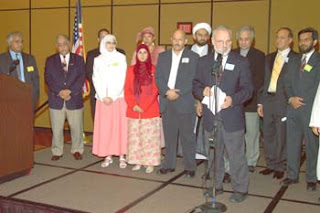 Unity Day 2005 – Muslims from every tradition came together on this day and the duwa (prayer-blessing) was led by the Sunni Imam, followed by Shia and Bohra Imams in the subsequent years, Insha Allah we will get every spiritual leader from within our traditions to lead each coming year.

Unity day is a mainstream event, where people from every faith and denominations come togther as one cohesive group. We had 12 such groups at the event: Bahai, Buddhist, Christian, Hindu, Jain, Jewish, Muslim, Native Indians, Shinto, Sikh, Wicca and Zoroastrians. The American National Anthem was led by Hijabi to non-Hijabi women. We are who we are and in that spirit we need to be together for the good of humanity.

Unity Day USA is an initiative of the World Muslim Congress and the Foundation for Pluralism, we will be celebrating that day for the 5th year on Sunday, September 6, 2009 – it is changing the paradigm of 9/11 into a positive one; where every American comes together to rededicate his/her pledge for one nation under God with liberty and Justice for all.

We the Muslims have been talking about developing unity amongst us; well it is time we take that step now. Each one of us, Insha Allah can make the effort to bring at least 5 representatives from each one of the following traditions; Ahmadi, Bohra, Ismaili, Nation of Islam, Shia, Sufi, Sunni, Wahhabi and every one that we will learn about as we move forward. If you jumped at the inclusion of any one of the names in the preceding sentence, we need to talk. We want you to share your views, not the recycled ones, but fresh ones that forges unity among us. 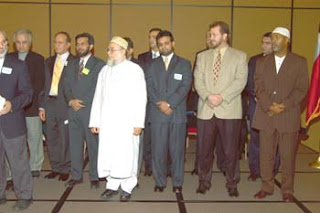 The gathering will test our ‘talk’ of unity with our ‘reactions’ to it, when it really has a chance of happening. It will also test our abilities to accept the otherness of the others who differ from us.

Why do we need to be together?

Each one of us can bring different ideas to the table, the core idea is to find solutions to our own issues, do we have the room within our thought process to accept the diversity from within? If we are not tolerant of each other, then how can we expect others to be tolerant?

Together can we do things that are good for Muslims and good for the world and stem the growth of reciprocity. The problems some Muslims may have encountered and some the future generations may encounter can be looked at, to find solutions by pooling the resources. 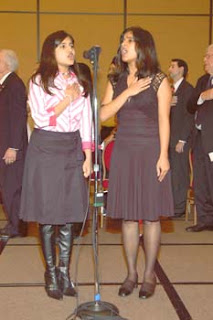 Every thing in life begins with you and me, and each one of us reading this material ought to feel the responsibility to do his or her share towards good making.

Let’s start small; we can take this initiative in each town we live. Let’s make an effort and give room to the distrust that has been ingrained in us against each other- i.e., if a few don’t want to attend, let’s not blame them, instead pray that our intentions are pure and hope they would join us in the next meeting. If they can see the purity of our thoughts, I am certain they will join.

We should come together to consciously create a better world, what is good for Muslims has got to be good for the world and vice-versa to sustain that goodness. After all, our faith is named Peace and we have to act it.

For the Dallas gathering, I would like to dedicate this event to Larry Basheer, Imam Shakoor, Maryam Ruhullah, Marzuk and Alexis Jaami, Imam Zia Shaikh, Imam Dr. Yusuf Zia Kavakci and Rizwan Sheikh who are relentlessy working on promoting goodwill and understanding between various communities.

We need to start planning to meet as soon as we can, and plan on having the “Muslims together” gathering to be held on first Sunday of Ramadan and conclude it over Iftaar. You can imagine the good things we can do. Let’s start with a group of about 30 people in each community and build from there.

The group’s formation is not about the historical or theological aspects of religion, it would simply be about the civic aspect, the rights and duties of individuals to each other for our own good and the good of others around us. We have to sow the seeds that benefit the future generation and perhaps our own when we retire. Together we can create a lot of good.

Muslims together is to be made up of any Muslim, scholar or not, but certainly from every tradition to come together to explore the goodness we can generate for the benefit of Muslims and others. This is not an organization to compete with any one, it is simply to encourage unity among us. The separateness that our smallness has created needs to come to an end. Think about it, do others have to be wrong for us to be right?

I will ask the Muslim Council of Mosques in Dallas to take this project, I hope they can make that time. Otherwise, any one of you can come forward and take this initiative forward. It is not any one’s responsibility, it is yours and mine, if we feel it. Praise the Lord, Alhamdu Lillah.

A lady in her sixties dies in a car accident and was pleading with God, as to why he did not give her life to serve him more and serve his creation. After the amount of begging she did, God wanted to give her a break and said “Ok, you have a good record of serving my creation and I will grant you another 20 years of life”.

The lady was all happy and upon reappearing on the earth, she dashes to the best cosmetic surgeon in the town and asks him to make her look like a beautiful young maiden of 45. So the surgeon does the work, she looks in the mirror, fully satisfied and thrilled how beautiful she was, out she walks.

As she stepped out on the street to cross over to the parking lot, she got hit by another car, and went back in God’s presence; she calls him all the names for not keeping his word. She questions the almighty, why did he promise 20 more years and killed her the moment she was ready to live for another 20 years. She was proud that she looked like a gorgeous young maiden.

God looks at her with sympathy and speaks; do you know what?
She retorts back, what?

God says: I did not recognize you.

Applying that idea to Muslims.

When we gather around on the Day of Judgment and God calls out: Next? And you walk up to him and say ‘Sunni Muslim!’, ‘Shia Muslim!’ or ‘Ahmadi Muslim!’ Prophet Muhammad may perhaps be surprised and ask, What Muslim? What did you say?

Folks it is time to shed the arrogance of being right. Several times a day, we recite ‘Malik-i-Yomiddin’. i.e., God alone is the judge of humans and he alone is the master of the day of the judgment. If we get our religion right, we would refrain from judging any one. Meaning, we don’t want to become God and start judging others. God knew, some of us are thick headed, and that is why he made 17 units of prayers ‘fard’ or ‘obligatory’, and with Sunna and Nafeel, we utter ‘Malik-i-yomiddin approximately 51 times a day. We also utter Bismillah at least twice as many times if not more. Do we not get that into our system?

One Mufti from Mecca declared that the Shias are not Muslims, and likewise a Shia scholar matched with the Mufti to declare Sunnis are not following Islam. And some of us declare that Ahmadi Muslims are no Muslims, we even make their lives difficult. The relationship between you and God is to bring humility and balance to ourselves and what surrounds us.

Hear what Larry Basheer, An African American community leader has to say “ACCEPTANCE: When we have tried to reach-out to the immigrants communities with open hands and arms more often than not the hand of the Immigrant hand would close, and I have been told “To My Face” that I am Not A Real Muslims” this is madness…………. However `If we are not correct or are not (Real Muslims) and are trying to be Muslims then it seems to me that it should be the duty and responsibility of the Immigrant to dialogue (since he is a Real Muslim and Know) and correct our way, however such dialogue require listening on the part of the immigrant as well, which I have not seen any evidence of a willingness to do so……..”

Evil exists because Good men do nothing about it.

It hurts me to read the comments from Larry Basheer; I have heard similar comments from Sri Lankan, Filipino, Bangladeshi and Muslims from around. Who the hell are we to say to others, that they are less Muslim than us? Who grades us? What kind of Arrogance is that? We have to shed this. Shame on any Muslim who thinks other Muslims are less than him or her. In Allah’s presence, we are all equal except when we are drenched in Taqwa; Piety – those who are; never think they are superior to others any way. Did we not get the message of the Prophet that no one is superior to the other…. except in piety. There is a whole verse about it, do we get that? Let’s not encourage any one to say those words, stop them in their tracts and let them not perpetuate it.

If you disagree with me, please say it so rather than asking me if my father knew Arabic or if I have a degree in Islam or if I went to an Islamic seminary or if I am a converted Muslim or how many chapters I can recite or even ask my tradition I belong to. First of all, No one has that right to question me or any Muslim about it, that is a dumb trick to judge, and claim superiority over the other.

Neither Muhammad (pbuh) nor any one of his associates had a degree, let alone schooling. This may be one of the reasons in God’s infinite wisdom that the Prophet was an Ummi; non-literate to prevent us from being arrogant and judgmental about others based on every factor including education.

God has blessed the Muslim community in Dallas; by and large we have made attempts to get together. The first such attempt was made on Unity Day USA in 2005. Three pictures are posted above representing every tradition.

This invite is going out to Muslims of every traditions that I know of in Dallas and randomly across the United States.