The good and evil forces are always chasing us, and whichever possess us in a given minute we act that out.  All religions evolved to show us the good path, a path that restores peace of mind and not throwing us into tumultuous 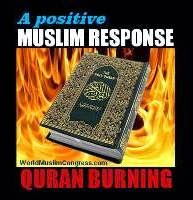 A friend has been posting several negative things about Islam and Quran on the Facebook. It has become her mission to denigrate the faith.  Thanks to Sean Hannity, through his show, I have learned not to play into the hands of the negative forces like Robert Spencer, Pamela Geller and their ilk. Instead, I have learned to take a positive step to mitigate conflicts and nurture goodwill. I strongly believe, if we can enlighten others, that enlightenment becomes contagious. Aggravating the other does not solve the problem, it takes you down as well.

She posted the following verse;

“Qur’an (33:50) – “O Prophet! We have made lawful to thee thy wives to whom thou hast paid their dowers; and those (slaves) whom thy right hand possesses out of the prisoners of war whom Allah has assigned to thee” This is one of several personal-sounding verses “from Allah” narrated by Muhammad – in this case allowing himself a virtually unlimited supply of sex partners. Other Muslims are restrained to four wives, but, following the example of their prophet, may also have sex with any number of slaves…”

I held the temptation to correct and explain, but decided that would be a wrong approach with the “determined” ones. One has to find the truth on his/her own to believe it, so I gave her the formula to read Quran (down below) that successfully worked out in our Quran Conference. Finding the truth is your own responsibility.

Here was my response.
It is human to denigrate and find faults with other’s faiths, traditions and books; it is also human to find the right answers. If something bothers you about a certain verse in “other’s” faith or books, the right thing to do is to read three verses before, three after, and the given verse.  Read enough times to understand it, instead of “gotcha” and gloat. Truth always brings relief, and liberates one from prejudices.  It is like having a good orgasm, it brings relief to the body, soul and the mind and you’ll be free and at peace with yourselves.

Four years ago, Pastor Robert Jeffress of Dallas Baptist Church blurted out, “Quran is a evil book written by an evil man” I challenged him to show where he finds that evil, how he interpreted them… he chickened out, I offered him to find 5 faults with Quran that we can agree in a public forum, if he could, I will become a Baptist, if not I will ask him to shed his hatred for Islam, Quran and the Prophet and become a peace maker that Jesus had called for. This went on local TV for a week and two pieces were written at Dallas Morning News.

Of course, Jesus don’t mean a thing to these men and women, it’s what they can get out using his name. Its’ just not Christians, but Muslims, Jews, Hindus and others also mis-use the scriptures for their gain.  Jeffress owed his congregation to do the research and tell the truth, he chose not to. One’s religion does not become superior by denigrating other’s, its cheap tactics. Finally thanks to our friend, Jon Halsey, we ended up doing a full blown Quran conference with 10 non-Muslim clergy on the panel, and we dedicated the conference to Pastor Robert Jeffress with gratitude for causing the conference.  It’s all here www.Quraanconference.com

This is where we need God’s guidance, to prevent us from promoting and encouraging hatred towards the other.  I wish you had written, this verse bothers me and I want to understand, instead of passing a judgment on the Prophet.

I ask you to gather up all those men and women, who want to remove bias against Islam, and have questions. As a matter of fact, removing bias towards any one or any faith. I am an an expert in Pluralism and will be happy to address the group of any questions they may have about Quran, bring all the questions.  I have taken the time to write because, I believe, we all need to help each other find freedom from misunderstanding and bias. Amen.

As Americans we have to work together to create a cohesive America, you can support our work or do it yourselves, I will be happy to help you, and you can help us by donating generously at: http://americatogetherfoundation.com/donate/

World Muslim Congress
To be a Muslim is to be a peace maker, one who seeks to mitigate conflicts and nurtures goodwill for peaceful co-existence of humanity. Our work is geared towards building a cohesive society where no human has to live in apprehension or fear of the other. World Muslim congress is a think tank established in 2002 to bring Muslims of all denominations together, one small step at a time. If we can learn to respect the otherness of others and accept our uniqueness, then conflicts fade and solutions emerge.
Share this: