Muslims Condemn the destruction of the signs of Christianity in Syria.

The prophet had said if any one of you is unjust towards fellow members of the humanity, on the Day of Judgment, I will stand up against you in support of them” and in a covenant with Christians preserved at St. Catherine’s monastery in Sinai, Prophet assured the Christians  that their places of worship will be protected and preserved. Even the 2nd Caliph Omar declined the offer to pray in the Holy Church of Sepulcher in Jerusalem after conquering the City – he said, if I prayed there once, some one down the road will claim it to be a Muslim property. 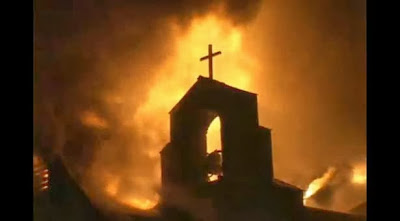 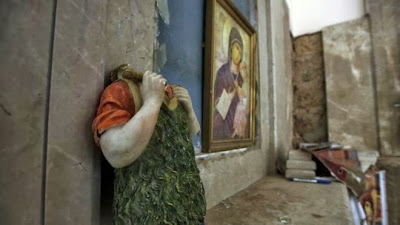 The Moderate Muslim Majority is sick of the Jihadist mindset, and are as frustrated as the victims of Jihadists. These are the rogues of the entire society, who have no idea what their religion teaches.

First of all, Muslims condemn the attack on the symbols of Christianity in Syria, and secondly, we stand with the people of the world in doing whatever it takes to stop the Jihadists from messing our lives. Remember, they are our common enemies.

“Shamefully those criminals called themselves Muslims and claimed to do it for Islam. Did Muslims authorize them? Did Islam Authorize them? Hell no.  They are dirty criminals and we need to get them and punish them.” Asserts Mike Ghouse, the president of World Muslim Congress, a think tank committed to building cohesive societies and nurture the pluralistic values of Islam.

” As the people of the world,we should not buy their alibi that they did it for Islam, the criminals did it on their own and we need to do unto them, what they did to other innocent people; terrorize.”

Islam forbids killing another human, unless it is purely in self-defense, and it even forbids suicide, which amounts to betrayal of trust God placed in you.

We the people of the World have been giving a pass to these criminals by blaming Islam, rather than blaming the criminals. Its time we do the right thing and knock these guys out, hunt them, find them and lock them up,  unless they surrender and seek to change.

There is absolutely no justification for killing another human being, none whatsoever.

The hallmark of civil societies is that every resident of the society lives in peace with others. No one needs to live in apprehension or fear of the other, we are all God’s creation and God cares for us to take care of each other.

Beirut (AFP) – Jihadist fighters linked to Al-Qaeda set fire to statues and crosses inside churches in northern Syria on Thursday and destroyed a cross on a church clock tower, a watchdog said.
Islamic State of Iraq and the Levant (ISIL) fighters entered the Greek Catholic Church of Our Lady of the Annunciation in the northern city of Raqa and torched the religious furnishings inside, the Syria Observatory for Human Rights said.
They did the same at the Armenian Catholic Church of the Martyrs, and also destroyed a cross atop its clock tower, replacing it with the ISIL flag, the Observatory said.
Most of Raqa, located on the banks of the Euphrates River and capital of the province of the same name, fell to anti-regime fighters in March.
Where the ISIL dominates in the city, it imposes a strict version of sharia (Islamic law) on the populace.
The London-based Observatory denounced these attacks “against the freedom of religion, which are an assault on the Syrian revolution.”
Not only have there been attacks on Christian places of worship in Syria, a predominantly Sunni Muslim country wracked by more than two years of civil war, but also on Shiite Muslim mosques.
Additionally, Christians clerics have been kidnapped, and some brutally murdered, by jihadists.
In January, the Middle East director of Human Rights Watch, Sarah Leah Whitson, said: “The destruction of religious sites is furthering sectarian fears and compounding the tragedies of the country.
“Syria will lose its rich cultural and religious diversity if armed groups do not respect places of worship.”
The New York-based group said that “while some opposition leaders have pledged to protect all Syrians, in practice the opposition has failed to properly address the unjustified attacks against minority places of worship.”
At the outset of the rebellion against President Bashar al-Assad, rebels welcomed the support of jihadist groups, largely made up of foreign fighters.
But the jihadists, where they have reached a position of dominance in specific parts of the country, are increasingly alienating the native population.
On Thursday, an ISIL commander from the United Arab Emirates was killed in fighting with Kurds in the north of Syria, the Observatory said.
Share this: